Welcome to Eisbach, the birthplace of river surfing and arguably the most famous wave in Central Europe.

The Eisbach is a 1.2 mile (two kilometer) river that runs through the Englischer Garten, a public park located in Munich, Germany.

Although it is a small outlet of the Isar River, the Eisbach features a very fast stream, making surfing a reality in an inland town.

The Eisbach Wave is a man-made standing wave located just 50 meters from the Haus der Kunst Museum of Modern and Contemporary Art, across from a nearby bridge.

Surf conditions in Eisbach vary depending on the weather and the time of year, but it could produce a solid three to four foot wave.

The best time of year to ride Germany’s quintessential river wave is March through November, when water levels are neither too high nor too low.

Although the Eisbach River wave rarely freezes due to its strong currents, it can easily reach extremely low temperatures of around 34 ° F (1.1 ° C).

The history of surfing in Eisbach

The origins of the world famous wave of the Eisbach River can be traced back to 1972, when a group of surfers first surfed it.

The German wave appeared almost overnight after the city submerged several concrete blocks under the bridge to block the strong current of the river.

At first, the surfing pioneers of Eisbach could only ride the wave in the spring, when the snow was melting and the water levels were high.

Dieter “The Eater” Deventer was one of them – then came Wolfrik Fischer, Walter Strasser, Quirin Rohleder, Daniel Osswald, Tao Schirrmacher and several other legendary surfers.

But the wave was still inconsistent, unstable, and sensitive to minor and subtle weather changes.

Thus, the pioneers of Munich surfing installed a few wooden boards which helped stabilize and improve the handling of the wave.

The illegal construction work paid off and the spot began to offer year round wave surfing opportunities.

But for decades surfing in Munich was a crime.

Local authorities did not officially allow surfing in the Munich Water Canal until 2010.

Until then, surfing a wave in Heimliche Hauptstadt – the “secret capital” – could get you in serious trouble with the police.

In fact, there was even a plan to destroy the wave and keep surfers away from German waters.

However, a group of local enthusiasts started a petition, created a website and held public river wave awareness sessions in an attempt to save the artificial surf spot.

In the end, the authorities were sensitive to the arguments and the will of the community to make it a surfable wave and kept the spot intact.

There are still some rules to follow. A warning indicates:

“Concrete baffles under the wave pose a risk of serious injury.”

“Due to the strong current, the Eisbach wave is only suitable for skilled and experienced surfers.”

“Only one person is allowed on the wave at a time. It is strictly forbidden to surf under the influence of alcohol or drugs.” 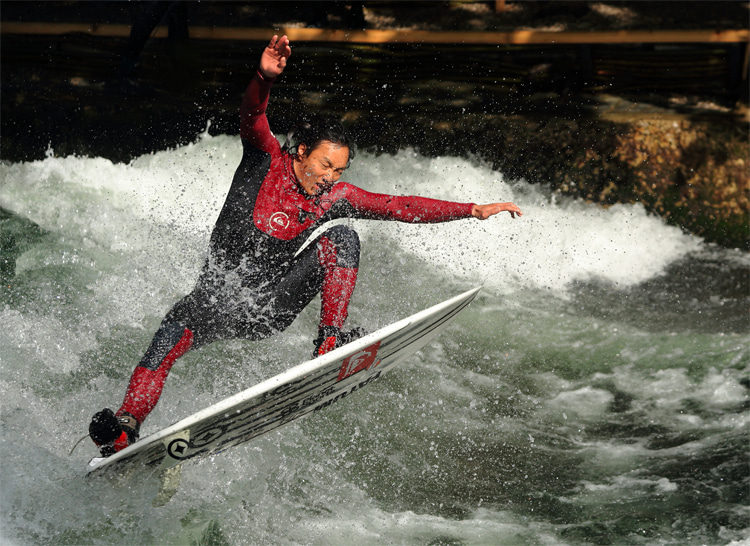 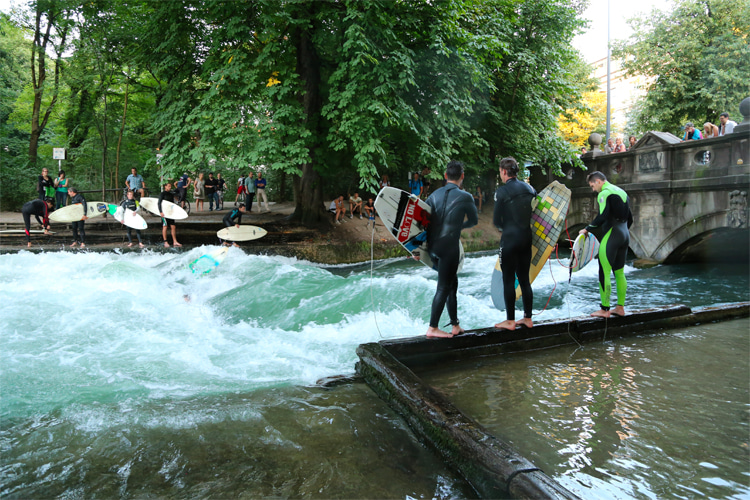 Despite its shallow water, the fins can be used on surfboards, as long as you choose a small configuration.

There are rules you must follow if you want to be accepted and respected in Eisbach.

Since there is only one peak, you will have to queue, wait your turn, and make sure you don’t ride the wave for half an hour.

According to the informal code of rules, you are allowed to ride the wave for as long as you can, but common sense should prevail.

So just because you can doesn’t mean you should, so be sure to let others enjoy this natural treasure.

Therefore, the average ride is between 20 and 40 seconds, which will allow you to do a few turns and maybe a few tunes, pop shove-its and kickflips.

Is there localism in Eisbach? Yes there is.

The spot even had a fierce superintendent – the “Hausmeister” – who once told Kelly Slater that he was not allowed to ride the German wave.

In addition, only one person can ride the Eisbach at a time – party waves are unwelcome and can lead to injury. 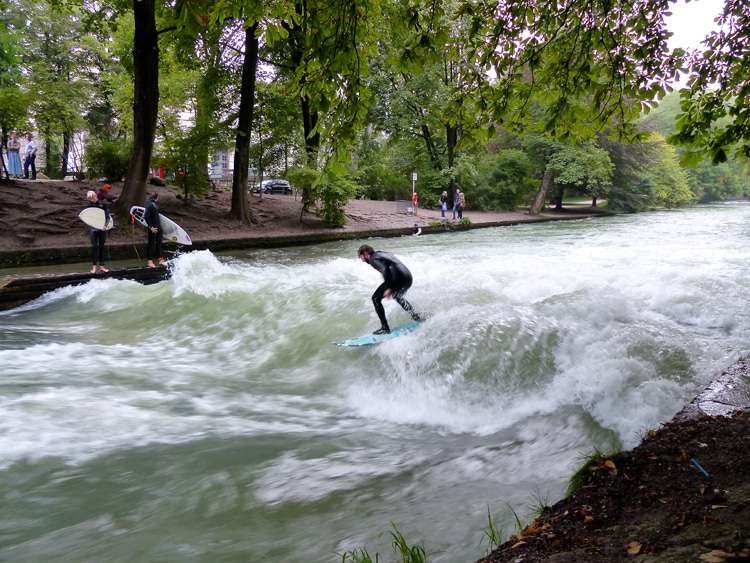 A standing wave is not an ocean wave, and Munich’s surfing jewel can be difficult and complex to master due to its rapid flow characteristics.

In fact, water is flowing at around 20 tonnes per second.

It all starts with an often difficult take-off, or a step if you will.

And if you do manage to get into the wave, be prepared for constant bumps and being kicked out by the fast flow.

If you fall, be prepared for a longer or shorter hold in the turbulent whitewater washing machine just downstream.

In Eisbach, you don’t paddle the wave – you jump on it from both banks of the river.

The most common technique involves a small drop of acid in the face of the wave, in a manner similar to what can be done with a skateboard.

At the time, locals tied a rope to the bridge to hang on to and make surfing easier and sessions longer, but the practice was later banned as it was dangerous and potentially harmful.

During the last decades, the quality of the waves of the Eisbach river has gradually improved.

One of the improvements was the attachment of strings to the bridge, creating two U-shaped patterns that refined the wave’s breaking pattern and increased its height.

Today the place is often crowded. However, the lines could be shorter during the cold season.

Also, at night around 11 p.m. you might be able to ride the German First Wave without anyone else.

The Eisbach has a fast and powerful current. Every year people lose their lives swimming here. So never take the break on your own. 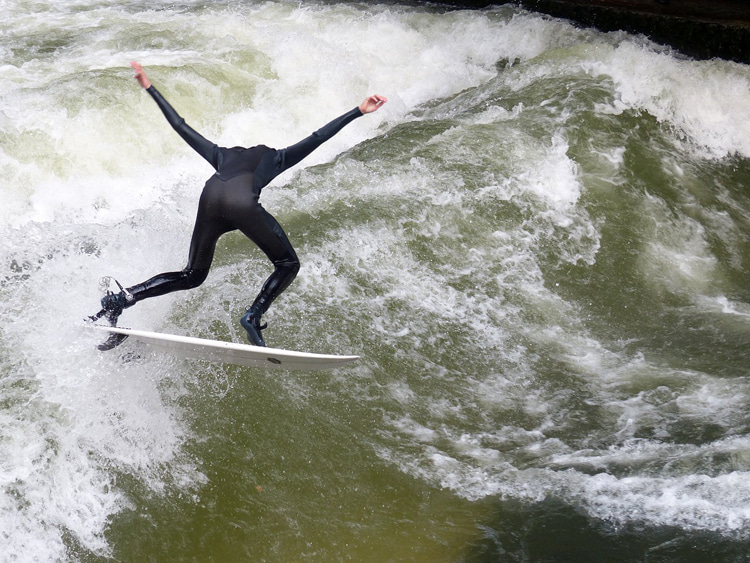 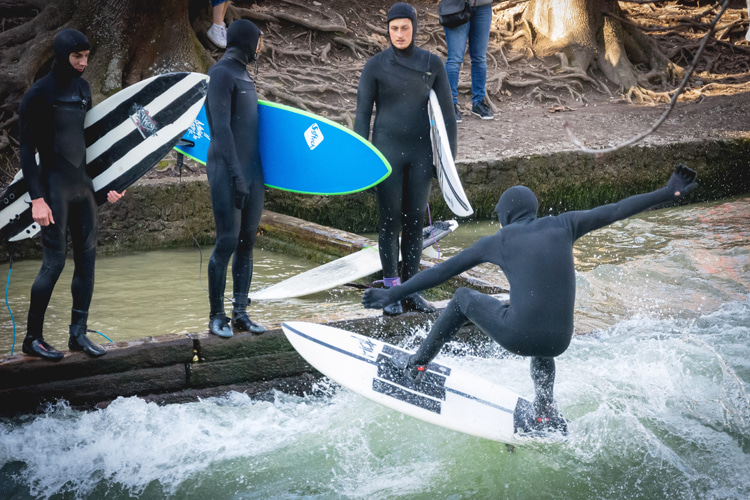 The three other surf spots in Eisbach

Today, Eisbachwelle is arguably Germany’s ultimate surf spot and one of Munich’s most popular tourist attractions.

But the city has opened up three more river waves to allow more surfers to enjoy this thrilling experience.

There is a second larger standing wave upstream near the Zum Flaucher beer garden which is perfect for beginner surfers.

It allows multiple cyclists at the same time, but it usually only operates from April to September, when the snow in the Alps melts and pushes additional water into the Isar River.

A third wide wave is available north of the original Eisbach wave, near Englischer Garten.

The spot offers another great option for less experienced surfers thanks to its less powerful current and less demanding riding characteristics.

However, the spot can only be walked a few days a year when water levels are high and tree branches and flood dirt clear.

“The sound and roar of the Eisbach wave suffocates everything. A fire engine blasting past with sirens suddenly seems very far away,” note the surfers of Eisbach.

“The roar of the spray is deafening. The current of the water catches the eye. Time seems to have stood still. All the senses are focused on one thing – the wave.”

It’s easy to see why Eisbach means so much to this hardcore group of indoor surfers.

Munich is on the edge of the Alps and far from any coastline.

Suddenly the landlocked city became known the world over for more than Oktoberfest: surfing.

Surfing tourists from all over the world, big wave legends, world surfing champions and professional surfers have started to book tickets to Munich to experience this unique wave with the local crew.

In the 21st century, the spot has been placed at the top of the wish lists of many surfers.

The Eisbach wave is constantly surfed – 24 hours a day, 7 days a week, 365 days a year. It’s a natural machine that never stops.

“It is probably the most surfed wave in the world”, add the kaisers of Eisbach.

“Where else can you watch the surf so closely and be captivated by the waves without getting very wet? This is the place where the non-watching surfs.”

Every year, the locals try to improve the driving conditions in one way or another, always taking into account the two water channels that arrive separately under the bridge.

The goal is to try to equalize the water levels coming from the two channels.

“Keep Surfing,” a 2009 documentary by Bjoern Richie Lob, bolstered Eisbach’s reputation as one of the most exciting river waves on the planet.