FIERCE: Seamus Carey and Andrew Harvey of the Harvey Cedars Beach Patrol paddle to the beach for the second leg of the rescue relay during the HCBP’s midsummer meltdown on August 9. (Photos by David Biggy)

As Shawn Hannon stood up inside the Ship Bottom Beach Patrol surf boat, a wave hit the side of it and he toppled face-first into the 62-degree ocean. He was fine and ran calmly down the beach towards the finish line with a smile on his face.

“God, I had no choice but to move on or else I would have been sprawled inside the boat,” Hannon said moments later, laughing at the comedic element. of the incident that capped Harvey Cedars Beach Patrol’s August 9 summer merger. , while Ship Bottom finished third behind Lavallette and the host team. “It was fun rowing in the moonlight. I couldn’t see anything there, but it was so much fun.

With the ocean temperature so low and rough waves coinciding with a brisk 20mph wind, only six patrols – SBBP and Cedars were the only two from LBI this time around – opted for the final island tournament of the summer season.

“It was more like the midsummer cooler,” Cedars manager Randy Townsend said as darkness began to set in. “It was cold, the waves were big and it was pretty tough out there. A few teams bailed out at the last minute, but it was okay. Everyone had fun and nobody got hurt, so it was a good time.

Lavallette had a lot of fun racking up 35 points to become the first patrol other than Harvey Cedars to win the tournament — formerly the Cutters Cup before a title change last summer — since its introduction 12 years ago.

The immediate northern barrier island crew won the Swim Relay and Ironman Medley while taking second place in the Paddle Relay, Rescue Relay, Boat Swim and Double Row. Before the last event, Lavallette had already obtained at least one tie for the team title. 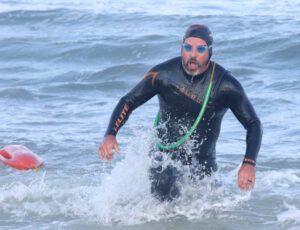 TAKING A BREATH: Tommy Smith of the Ship Bottom Beach Patrol steps out of the cold ocean during the opening swim relay during the midsummer meltdown on Aug. 9.

For the new Midsummer Meltdown, competing teams were limited to eight lifeguards, one of whom had to be a woman, and there were no queues for specific events. Instead, a coin toss of Popsicle sticks in the sand—each with a number corresponding to a lifeguard from each team, assigned at check-in—provided a team with its competitors for an event.

The order of events caused the numbered popsicle sticks to be redrawn after the second and fourth events to define the composition of each team’s competitors for the next two or three events, depending on the number of competitors needed to each.

After Lavallette easily won the swim relay, Diamond Beach took the victory, worth seven points, in the paddle relay. Lavallette looked to be in excellent position to add another first-place finish to his tally in the rescue stint, but Stauffer closed what had been a 50-yard gap early in the row, before recovering Townsend, who had to swim to at the marker buoy as part of the third leg of the race. 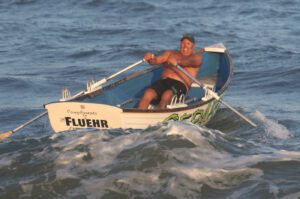 Once Townsend joined Stauffer in the boat, the duo caught up with the Lavallette duo halfway to the back of the line, then leapt on top of a wave to reach the beach first. Townsend easily raced to the finish to give the Cedars their first win of the night.

In the next event, the Boat Swim, the two-man boats for Cedars, Ship Bottom and Lavallette all reached the mark at about the same time, but during the swim portion to the beach, Waterhouse used a wave to edge out Reck and then edged him to the finish line for the Vikings’ only other win.

Lavallette took first place in the Ironman Medley and Cedars took second place, and the race was on for the team title, with Lavallette holding a slight advantage, 29-25. Augenbaugh and Mahana then delivered a Double Row dynamite as Lavallette chased them, but Cedars finished fourth to close the seven-point deficit.

Waterhouse hit a strong singles line for the Cedars, who needed a win and a goose egg from Lavallette in the final event to tie, but took second place behind Hannon, giving Lavallette the team title. HCBP finished second with 32 points, while SBBP took third place with 22 points. Diamond Beach and Sea Girt finished with 19 and 18 points, respectively, and somewhat surprisingly Ortley Beach finished without any points.

Besides ending the island tournament season with a personal win, Hannon simply relished the opportunity to compete alongside his LBI pals, especially since he was ineligible to enter the tournament. from the island the previous weekend.

“I wasn’t even there because I didn’t work my stupid 18 days,” Hannon said with a laugh. “You know, I say it all the time, coming here and being with these guys is the best. It’s always a good tournament to end the season on the Island. Cedars mixes the things, do something a little different, and it’s just cool to kick back and relax with it. It’s so much fun and I love it.

Pepper Kolman did her best to lift the Surf City Beach Patrol to another Long Beach Township Beach Patrol Women’s Invitational title on August 8, but Barnegat Light had accumulated too many points before the Ironwoman even closed the action at Brant Beach.

The Light took the spot with 59 points, while Surf City took second place with 52 points and Ship Bottom finished third with 36 points. Beach Haven took fourth place with 19 points, and the two Long Beach Township teams had 20 and 9 points respectively.

After Kolman won the Singles Row ahead of Mumau, Rowe Crawford of The Light took first place in the Mile Run to put his team ahead of SCBP by nine points, 38-29.

The Surf City quartet of Bella Turner, Emma David, Haley Kearns and Kesley Kyland won the Paddle Relay, and Turner and Natalie Davis went on to win the Buoy Rescue to cut the deficit to eight points, but Mumau and Patterson won the victory in the Double Row to make it a 13-point lead for BLBP.