The waiting period for surfing at the Olympics is July 25 to August 1. Stay tuned for our daily forecast. To watch the rounds live, download either the NBC Sports app or the official Olympic Games app (or both) and follow the surf. (Remember, Japan is 16 hours ahead of California, which means the playoffs will be in the late afternoon / evening.) Here’s more coverage from the Olympics.

Tomorrow, surfers from all over the world will compete in a competition like they’ve never experienced before: the Olympic Games Tokyo 2020. And whether they’ve been admitted by the WSL Superstar or by the ISA, you better believe it took them a long time to get here.

But where is it exactly? Yes, we know it’s Shidashita Beach, but what’s the vibe on the pitch? How is the atmosphere in the water? Is the wait palpable? Is the pressure overwhelming? Or does it look like any other beachbreak during any other contest window for any other series of contests these surfers went through in their young lives before leading the biggest? plunge into the history of sport for the general public? Surfline called Brett Simpson, Team USA’s Olympic surf coach, between exercises to get a feel for it.

Brett Simpson: It’s okay. We had a training camp for the sick, we had to do the wave pool [Shizunami Surf Stadium], and this thing is just… Wow! Now we’re here in Shida and the last three days have been really small – one to two feet, maybe the odd three feet, but surfable – so it’s kind of like Groundhog Day in that sense. We had some good sessions for what it was, but I think all surfers in general want more now. We are all waiting for the ocean to change and take it to the next level.

Did the team have enough time in the pool to shake off the cobwebs, relax and test their equipment?

Oh yes. This thing saved us. If we had spent four days in the ocean I think they would all be a little jaded by this point as it was quite small by the time we got here. So as far as timing and reps goes, the pool has helped a lot. They got to try boards, they are really in shape and they are having fun.

But are they tearing up?

We look good! We had some amazing sessions in Shida among some of the teams that were there at the same time, and I was quite impressed. I think we’re ready, but like I said it’s been three days of these smaller, cleaner, slower conditions where you feel like you’re not doing much. Like, someone will get the weird three-footed while everyone else gets busy rolling those little one-footed ones, so it’s been hard to really assess who’s fit. And that’s probably going to change anyway, as we have swells ahead.

Are practice sessions / freesurfs strictly regulated to give all teams the same water time, or is it just free play for all?

Anyone can surf at the same time, but 5:30 am-6:00pm is the window for the athletes. There was talk of having a team session, where you would have your team there at some point, but everyone thought it was a little unfair with the tides. Everyone wants to ride Shida on different tides, so it’s been a scrum. But since I’ve been here most of the people I’ve seen there were around 13 at a time, which isn’t crazy. There’s that little sharp right turn and then a little left turn next to the main pier, and it can get a bit cramped. Four to six people is a good number, but not more than that is a crowd. You may have to surf for an hour or two to get two decent rides. So, it’s a little harder mentally, and surfers don’t necessarily get the flow they’re looking for. But overall the surf looks good.

Is it more or less difficult to demarcate a distinctly tearable area or bench in Shida, rather than defining your average SoCal beachbreak?

We kind of reduced it. For the size of the waves, the area was in the middle of the beach, and quite straight towards the other pier. There are a lot of tap-tap-tappy waves where you do the same maneuver, so we worked to try to locate that main maneuver, you know, the highlight. And then during the break, everyone obviously moves. Starting from the pier, there is a small runner to the right. Then you can go a little further and find yourself left or right. You just have to stay active. Our surfs are more about doing cardio rather than sitting on your butt for 20 minutes. That has been our goal, and with John John and Brother both coming out of injuries, they’re catching more waves than usual which is good. They want to bring the reps in, and like I said the pool was huge for that. They have to get that much-needed feel in the lower half.

Okay, so everyone is healthy. Morale is there. Council are made up. How is the marching band?

It’s different, because we won’t have any fans here, but the setup is extravagant. I mean, it’s a big fucked up investment – we’ve heard they spent something like $ 25 million on this stuff. Been here several times, for QS a few years ago, and it was just normal scaffolding in front of the beach. And from what that neighborhood was then to what it is now… Damn, it’s a real small town now! If spectators were allowed to watch the event live, on location, it could have been a huge home advantage for the Japanese team. Whereas a guy like John John Florence doesn’t really care about that stuff. Not having any fans around can give it a bit more clarity. He can stay more focused, so we’ll try to use that to our advantage. Obviously there will always be media out there, and it’s a live broadcast, but we are reducing distractions and preparing for it all.

How? ‘Or’ What? Do you have a TM specialist or something?

Better yet, we have Dr Michael Jervais here with us! He does a lot of work with athletes on mindset and focus, and he puts a lot of things into perspective – picking their brains out and preparing them for certain times, like those 10 minutes between each round that they introduce you to. Because there are a lot of different things going on that we’re not used to, things that we would never normally experience in a QS or CT event, and that adds more pressure. So it’s about being prepared for these kinds of things, so that it doesn’t catch you off guard and make you nervous. We’re just trying to tick all the boxes and do our homework, so we’re ready for those times as they come. Then the surfers can just focus on the 20 or 30 minutes they spend, have fun with it, and hopefully that will lead to a lot of success. 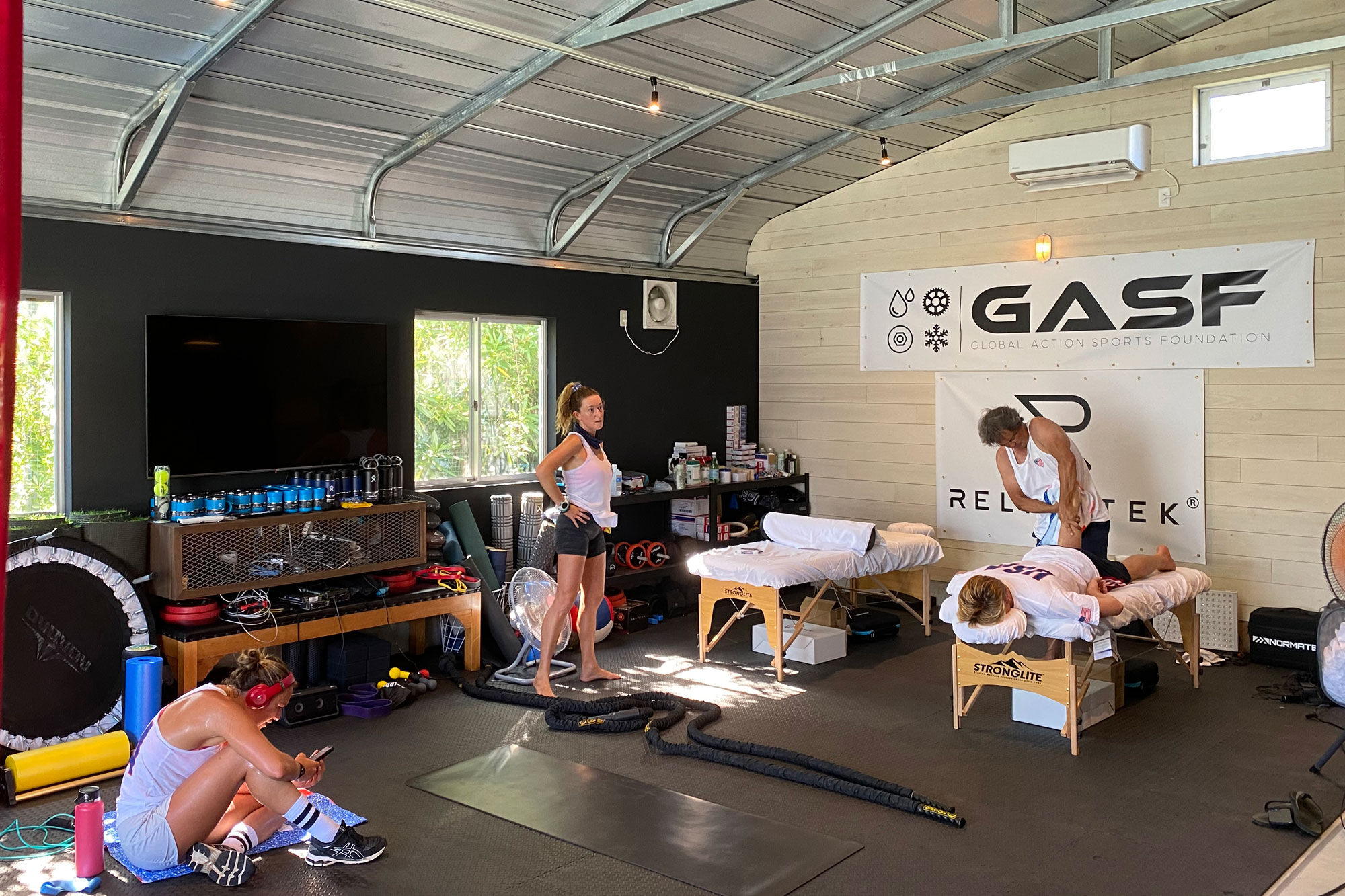 Speaking of focus, with the WSL’s competitive ploy becoming so erratic since the coronavirus outbreak, there doesn’t seem to be as much antipathy towards Olympic surfing. Suddenly, it seems a more reliable option than a career in the QS.

The Olympics grabbed everyone’s attention once all of those TCs slowed down. After Oz, the main focus for surfers became the Olympics, and having that camaraderie is important. I obviously have a good relationship with Carissa and Brother, and I was able to work with John and Caroline in California before we left, so I feel like we did a lot of work that we needed to do before we got there. here. We have a good flow as a team and there is a good chemistry between them all.

Have you all had contact with American athletes from any of the other sports, or have you been in your own little bubble?

We’re in our own little world here, just because we’re about an hour and a half from the Olympic Village, but we’re going to be doing some fun posts and social stuff and supporting the other sports that we have friends like skateboarding and riding. water polo. Some sports have already started, so we are monitoring this a bit to increase the excitement. We also have Kaleigh Gilchrist here, and we’ve been trying to get on TV. 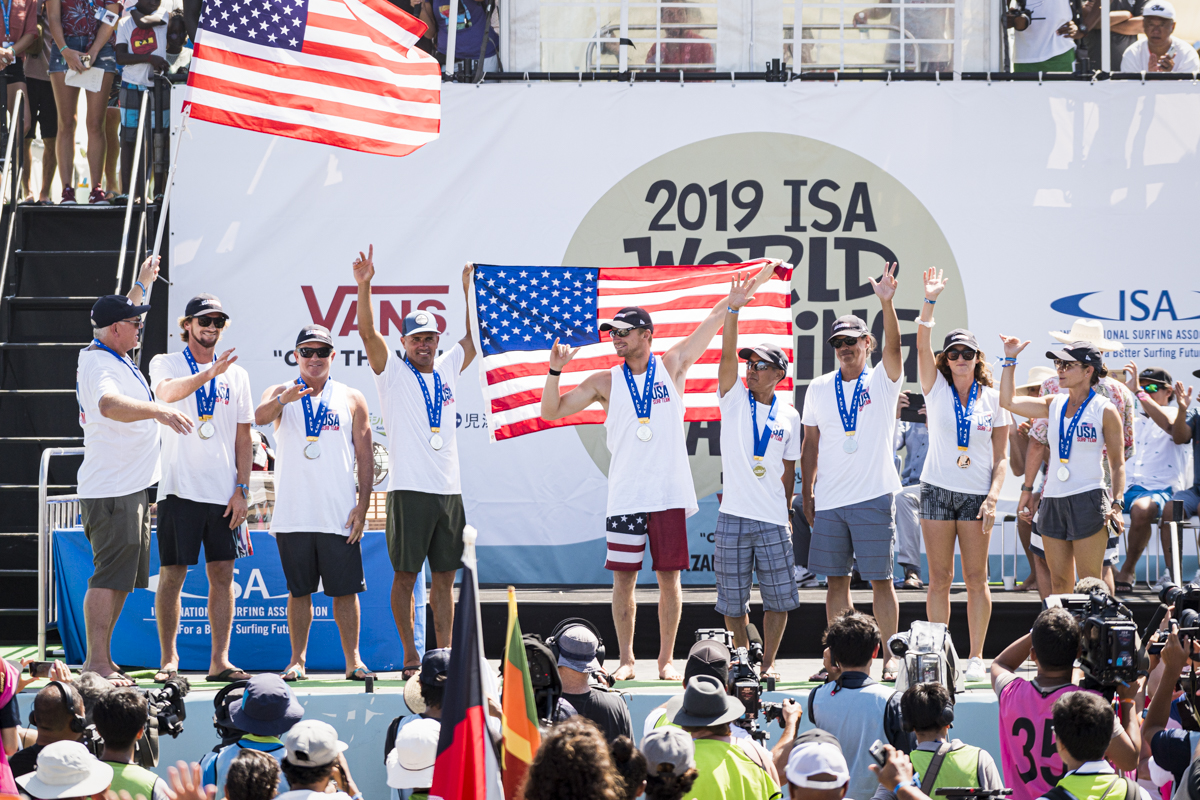 Team USA with a silver medal at the 2019 ISA World Games in Japan. Photo: Ben Reed

Did you witness any weird rituals or psychedelic swagger from any of the other teams?

Well a lot of people were very interested that we were going to the pool [laughs]. I think they are pretty frozen. There were a lot of questions, like “How did you do that?” Most of the teams seem pretty tight, though, really connected. Brazil seems a bit more dispersed, with everyone doing their own thing. Surfing is still an individual sport, so my job is to balance everyone out and meet all of their individual needs at different times – you know, get Caroline and Brother together to surf very early in the morning, then get Riss and John on it. second. session around 8 a.m., 8:30 a.m. We have our little routine and it works very well.

I guess they can find some comfort in the fact that, despite all the big differences, the judgment is the same.

Oh yeah, they’re used to judges. A lot of the main judges are here from the WSL, as well as a few ISA judges who are doing a great job. So it’s exciting for them, but being the third day of small waves, their energy wasn’t quite what it was yesterday or the day before. I think it’s more a matter of recalibrating for the incoming swell. They’re prepared on the boards they’re riding now, but what if it’s four to six feet? What if it was an eight foot wind wave? We just check all the boxes, so when the day comes we are mentally ready. And I hope we have some time to prepare for this bigger surf. Because he could be there the first day! But with the athletes that we have, the bigger it is, the stronger they become. I think everything is going to go very well.

And personally? I mean, I’m talking to a guy who’s been through it all, foggy, frosty pro-ams with maybe nine surfers and five staff in Nowheresville to the top of a podium at the US Open in front of a quarterback million screaming fans.

Oh man we are all grabbing this amazing opportunity and really taking advantage of it. Because sometimes you forget to do it. I have certainly felt that at times in my career, and I know those athletes too. It’s a full-time job, but sometimes it feels like that’s it. So, you don’t want to miss out on these opportunities to really take advantage of those warm and fuzzy feelings, which often translate into a lot of good things in your life. So I think all of our athletes are doing a good job of putting everything in perspective, so that they can really capture the moment.